The peacoat, known for its tightly-spun wool and oversized collar, traces its roots to sailors in both the British and U.S. Navies who needed protection from the wind, water, and ice they faced when climbing up the rigging of sailing ships to adjust sails. Over a century later, it’s now a staple in winter scenes because of its beloved style, versatility, and of course, its warmth.

Selecting a winter coat is no simple matter, but in choosing a peacoat, you’re choosing a coat with a long history of aesthetic value as well as military-grade warmth.

What is a Peacoat?

In its most basic form, the peacoat is a double-breasted coat of thick wool with large lapels and a sizable collar that can be flipped up to keep biting winds away from the face and neck. Most have vertical pockets – not so much for storing items as for keeping the wearer’s hands warm.

Designers have created the peacoat in the image of style trends, offering various colors, lengths, and cuts of the coat. But the classic peacoat is a throwback to its’ old Navy days: the peacoat is most original as a coat that rests a bit below the hips in a navy blue hue. 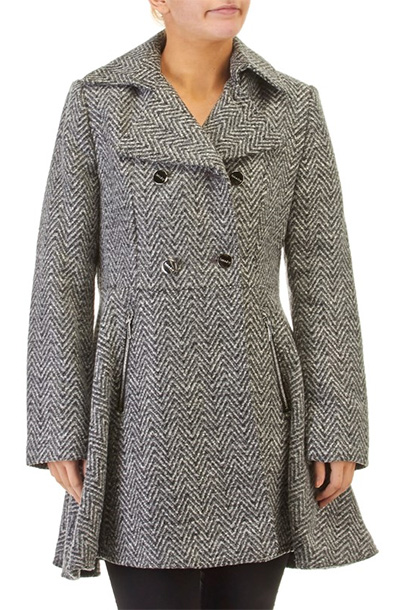 Several different materials are often used to make peacoats, and these materials determine both the warmth and cost of the coat. On the most expensive end of the spectrum is cashmere; made of goats wool rather than sheep’s wool, cashmere is luxurious and exceptionally warm. But it's also expensive and requires frequent maintenance and careful cleaning. More commonly used is Melton wool, or sheep’s wool. This is easier to acquire, making it the most reasonably priced wool on the market for peacoats.

When buying a wool coat, it’s also helpful to keep in mind the percentage of the wool. A peacoat that is 100% wool will be more expensive, but will provide more warmth than a blend. However, a blend of wool with a material like nylon, acrylic, or other manufactured materials will dramatically affect how the coat moves and feels on your skin. This is largely a matter of personal preference, but it’s certainly worth considering when shopping for a peacoat.

A History of the Peacoat

If you look closely at a peacoat, you’ll notice its subtly nautical style. There are many varying timelines of the evolution of the peacoat, but most agree that the earliest appearance of the peacoat was in the Netherlands in the 19th century, specifically on the backs of Dutch sailors. In fact, the Dutch gave the peacoat its name, deriving from the Dutch word “Pijjaker” or “pij” which refers to a thick wool coat worn by seamen.

The coat made its way to Great Britain, another seafaring nation, where it became part of the petty officer uniform in the British Navy. And, borrowing from their neighbors across the Atlantic, the U.S. Navy picked up on this useful, practical, and durable sailor’s coat and applied it to U.S. Navy uniforms. Clearly, the peacoat has proven over the course of a century that it is built to last, and built to keep the wearer warm in the harshest of conditions.

Around 1913, companies began manufacturing the coats for the U.S. Navy until World War II; after the war, military grade peacoats became available to civilians for purchase and the trend caught on for men, women, and children.

What to Wear with a Peacoat

A common perception is that peacoats are only for slim, slender people, but this couldn’t be further from the truth. Any body type can wear a peacoat and look great at the same time. It’s a matter of planning one’s outfit and considering what coat works best for different body types.

The traditional peacoat falls just below the hips, but many different shapes and lengths are available for women looking for a flattering coat. Particularly curvy individuals will want to consider a knee length peacoat that will highlight curves without causing a bulky look, whereas petite women may want to include a belt to add shape to their peacoat.

Since the wool of peacoats already provides immense warmth, it may be helpful to layer, but do so sparingly; avoid adding layers that will make the coat look bulky. A warm sweater would be sufficient, and would also add color to a blue or black coat. Peacoats are a fashion statement in and of themselves, so wearing slimming pants or a skirt that falls to the knees help to draw attention to the coat itself.

Likewise, designers make peacoats in almost every color imaginable. With black and blue being the most classic colors, the opportunities to mix and match scarves and gloves are much more numerous. This is especially fun during the colder months, when you have the opportunity to wear cold weather accessories like hats, gloves, scarves, or earmuffs.

Another common perception of peacoats is that they’re only formal or business attire. This, too, is far from the truth: a peacoat can look as fabulous with a pair of jeans and tennis shoes as it can with a pair of dress pants and leather shoes. Men (and women!) can wear a peacoat both to the office and on an afternoon winter outing.

Peacoats for men usually fall just below the hips; similarly, the idea is to avoid bulk and keep the attention on the coat itself. Men can do this by simplifying their layers; a white dress shirt can add a handsome contrast to a dark navy jacket, while retaining a business casual look. Slimming pants, like dress pants or jeans, also help to keep the focus on the coat itself.

For especially cold days, sweaters of just about any color can provide extra warmth. It’s often helpful to pick solid, simple colors like red or olive green to avoid too much variation in color for your look. A pair of shoes in a contrasting color like brown can round out a winter look that is perfect for those upcoming holiday gatherings, be it with friends, family, or coworkers.

During colder months, you’d like to look your best while also staying warm and comfortable. The peacoat offers flexibility in style – it can be both formal and casual – while providing warmth that has proven itself to be reliable and consistent for over a century and a half. If it kept sailors on the high seas warm and dry, it can certainly do the same for you – and you’ll look great at the same time.