Ever wonder why some fragrances you only need one spritz and they last all day, and others you can douse yourself in and barely smell them? After reading the fine print, you might be surprised to discover that all perfumes are not made equal. If you don’t know your EDP from your EDT, we’ve got you covered.

People have been trying to make themselves smell nicer for thousands of years, but even after we invented running water and figured out that regular bathing is a good thing, we’ve been passionate for perfume. The fragrance industry as we know it emerged in Europe in the 1800s. Modern fragrances are made of a blend of water, ethanol (alcohol), and scented oils. As they grew more and more popular, the types of perfume available became more and more confusing.

There are four key fragrance strengths to get your head (or should we say, your nose) around: parfum, Eau de Parfum, Eau de Toilette and Eau de Cologne, with a few bonus types to be aware of, too. They’re distinguished by the concentration of fragrant oils within each formula, although that’s not the only thing that makes each type different. Let us give you the rundown.

The following chart shows the concentration of aromatic oils for the different types of fragrance. 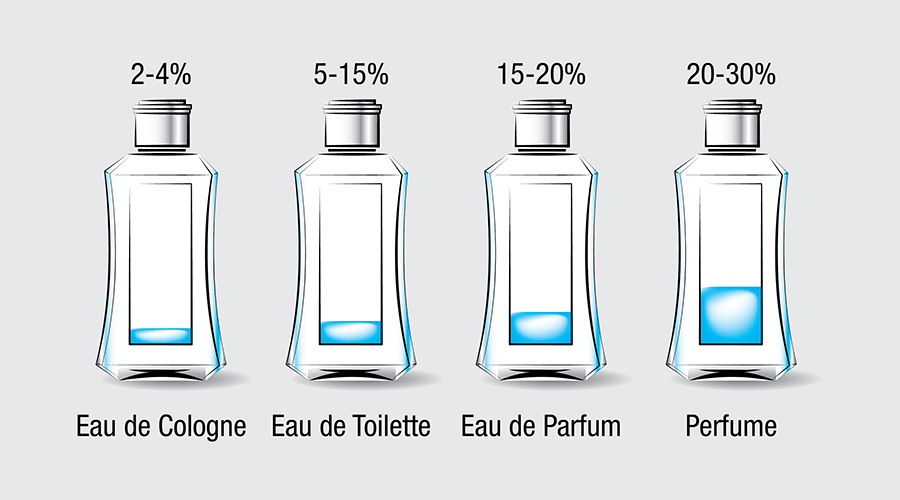 Parfum, or pure perfume, is the most concentrated form of fragrance you’re likely to find in stores, and it’s a specialty item. Parfums are rich, heady and strong, so they’re not for the light-hearted. With 20–40% aromatic oils, they’re special occasion fragrances, with a price tag to match.

Parfum is usually presented in divine collectable bottles with stoppers, to really make the moment of applying them magical. It can come in other forms too, like pure oils or even solid perfumes you rub directly onto the skin.

Eau de Parfum (EdP) is another very common fragrance type, although a little richer in scent than an Eau de Toilette. 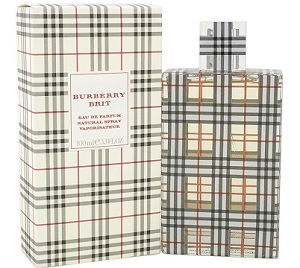 Eau de Parfums can be expected to last on the body longer, and have up to 20% concentration of aromatic compounds. Some people reserve their Eau de Parfum for the evening and only wear an Eau de Toilette during the day, but there are no real rules in fragrance!

As fragrances become more concentrated, the prices inevitably rise and the bottle sizes shrink. Don’t think you’re getting ripped off, though – many people think Eau de Parfum to be a good balance of value for money.

Consider this: one or two dabs give a rich, deep scent that lasts all day and doesn’t need a top-up. You can safely apply lightly for everyday wear and then layer it up for a special occasion.

Because of its concentration, Eau de Parfum can be found in stoppered bottles, but sprays are still very common – they’re just usually 1-2 oz., rather than the 3-oz. bottle you might find an EdT in.

The Eau de Toilette, or EdT as it is commonly known, is the most popular strength in the fragrance family. 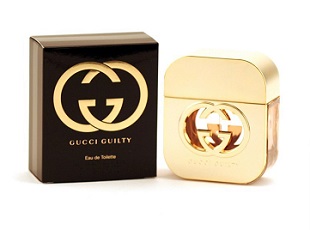 With a concentration of aromatic oils up to 15% but usually around 10, the Eau de Toilette is the happy medium between an airy Eau de Cologne and a punch of Parfum. If you take a look at your own bottles of fragrance, they’re probably Eau de Toilette.

Everyone has an old aunt that calls her perfume “toilet water”, but the name pre-dates our use of the word for the restroom – its older definition simply means personal grooming.

An Eau de Toilette will last 3 to 4 hours on the skin, making it a suitable fragrance for wearing to work (with a refresher at noon) or to a job interview.

You can afford to wear a few spritzes, and many people like to apply their fragrance to pulse points like the wrist. As your skin warms throughout the day, it will release more scent.

Eau de Cologne is the lightest strength of the family, with usually around 2–5% of its formula being made up of aromatic compounds. There are fragrances that are even weaker, usually called a splash or aftershave, but they’re so light you could imagine a scent and it would probably smell as strong.

People tend to call men’s fragrances “cologne”, but Eau de Cologne isn’t just for men, and men can wear other fragrance strengths too.

The word originates from Cologne in Germany, where the first Eau de Colognes were produced. Traditionally, Eau de Cologne had a light and airy citrus scent, but now the category contains fragrances with spicy, woody and floral notes too.

Eau de Cologne often comes in a larger bottle, and is usually the lowest priced in the fragrance strength family. It’s a no-brainer, right? Well, those lower levels of aromatic compounds means that Eau de Cologne also lasts the shortest amount on the skin – usually one to two hours. Don’t expect to splash on some Eau de Cologne in the morning and be catching whiffs of it all afternoon.

Eau de Cologne is a fragrance choice for a pick-me-up or a refresher, or if you or anyone around you is particularly sensitive to scents.

Regardless of a fragrance’s concentration, there are optimum places on the body to apply it to get a good depth and length of release of the scent. Those pulse points – behind your ears, on your neck, your elbows and your wrists – will warm up and reactivate your fragrance throughout the day. Some fragrance experts (called perfumiers, or “noses”) even recommend putting perfume behind your knees so the scent can rise!

As it turns out, there’s more thought that goes into choosing a fragrance beyond which smells the nicest or which has the most adorable bottle (although that’s certainly important!). How long you want the smell to last and the strength of the fragrance will determine whether you choose an Eau de Cologne, Eau de Toilette, Eau de Parfum or splash for a Parfum.